Being Correct on Correctable Errors

By Tim Malloy 10 months ago

If you’re an official who has been summoned to the scorer’s table to deal with a problem pertaining to a matter that falls under the heading of Correctable Errors, you should calmly bring to mind 10 words that will assist you in addressing the issue properly.

This mental mellowing exercise will at the same time also bolster your confidence, and perhaps enhance your credibility with the coaches who may reflect back on your competent handling of a chaotic situation.

Now the fine print on this credo is, after the clock has properly started, but if you keep the “before” and “after” time parameters in mind, you will never have a problem sorting through any correctable error snafu.

There are five correctable errors, and since four of them have to deal with free throw (FT) situations, you would be wise to pay close attention to the action after reporting a foul.

Failure to award a merited FT.

Permitting the wrong player to attempt a FT.

Attempting a FT at the wrong basket.

And, mistakenly cancelling or counting a score.

So, if you’re called to the scorer’s table to address an issue, take a moment to step back, exhale, and calmly determine if the situation is dealing with one of the five items mentioned above.

If it is, the matter must be corrected BEFORE the ball becomes live AFTER the next dead ball.

The next step is to quickly get with your partner(s) to mentally replay the game events that transpired since the moment in question to determine if the window of opportunity is still open to fix the problem.

Identify the error did in fact occur and when it occurred.

Identify when the ball was at the disposal of the thrower-in (the ball is now live.)

Identify the clock had properly started (in FT matters the clock would have been stopped) and play ensues.

Identify if you were notified before the ball became live following a score or a violation.

If you can answer “yes” to these ID’s, than you may correct the error.

Multiple steals or turnovers can occur without affecting the ability to fix a correctable error. If the error is NOT caught BEFORE a player has the ball out of bounds following a score; or BEFORE you or your partner hands the ball to a player following a violation — it is too late to fix the error!

If the error is caught in time, you must now ensure you properly resume play after fixing the mistake.

If the error is quickly spotted and Team A is entitled to shoot FT’s and still has the ball; you would simply stop play and line everyone up for the FT’s. 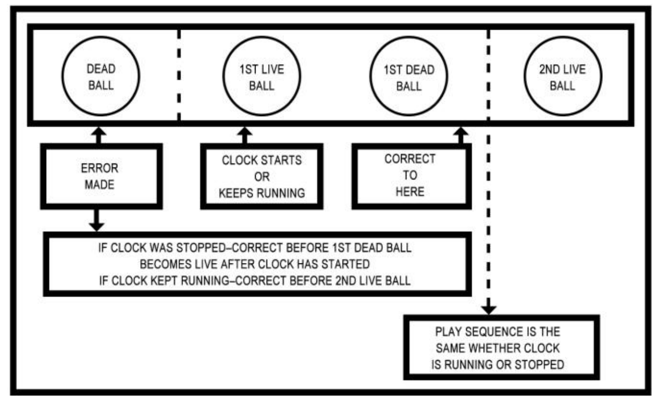 If the error is spotted after Team B has scored and Team A is entitled to FT’s, you would award Team A their FT’s with no one lined up, and play would be resumed at the point of interruption, which in this scenario would be Team A in bounding the ball under Team B’s basket.

And let’s not forget the one correctable error scenario that does not involve free throws.

While this situation is “slightly” different since the clock is running and the ball becomes dead (for the first time) during the actual “error” — you get a little more runway on fixing this situation.

If you give the signal indicating a made basket was a 3-point goal, and your partner believes the shooter’s foot was touching the 3-point line, this needs to be corrected BEFORE the ball becomes live AFTER the next dead ball.

The best advice is to avoid having correctable error situations occur in your game by paying close attention, particularly during FT scenarios, but if they do rear their ugly head, remember the Four ID’s and the 10 simple words:

360
One of My Good Friend Jim Prati's Favorite Subjects Especially The Last One!

When you think you've seen it all!